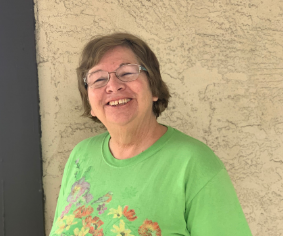 Pat Boyle was born in England, the year of the Queen’s coronation. In 1955, she and her parents were sponsored by a great aunt to come to America. They left London on March 29, 1955 and arrived one week later at Ellis Island on April 4,1955.

Pat’s father was born in Poland and her mother in Ireland. Pat’s mother never sought American citizenship because she wanted to remain an Irish citizen. Pat was able to go to the Academy of St. Joseph, a school her parents hoped would keep her away from the hoodlums. Pat loved her school because there were other girls from all around the world, which gave her the opportunity to explore many different cultural traditions, something she didn’t experience at home.

After high school, Pat attended nursing school. In 1972 when Pat was 20, her father passed away, leaving behind Pat’s mother, Pat, and her two siblings: Lucy, 8 and Stanley, 11. Only 11 months after losing her father, her mother passed away, leaving Pat as guardian for her two siblings. Having to get straight to work to support her family, Pat had to leave nursing school and begin working in childcare.

When Pat was in school, she and her good friends would dream out loud about who their husbands would be. Pat’s dream became a reality when she met Harry at age 21. Six years her senior and of Puerto Rican and Irish descent, Harry was tall, dark and handsome – just as Pat had imagined. They met at a block party in her Brooklyn neighborhood. Harry seemed to know Pat would be his wife, as he asked her to marry him almost right away. Not long after the proposal they became man and wife, as well as mother and father to Pat’s orphaned siblings.

In 1975 Pat’s husband Harry arrived in Santa Cruz in a 1968 Oldsmobile, while Pat stayed behind with the siblings she was now parenting. Harry told Pat about sunny Santa Cruz, where it snows. (People who were here in Santa Cruz in 1975 will remember the rare, historic occasion of a Santa Cruz Snow Day.) Pat later followed Harry by plane and arrived in Santa Cruz to find no snow, one of the very things she was looking to escape from in NY! Arriving in sunny California, Pat was four months pregnant with her daughter Dawn. Having become legal guardian to Lucy and Stanley, mother to Dawn, and eventually two sons Harry and Felix, Pat was busy caring for and supporting a full-time family.

Pat attended early childhood education classes at Cabrillo while also working in their daycare center. She cared for the children of teen mothers so the mothers could continue their education. She also worked for Lifespan, caring for adults. Pat enjoyed working for different people with diverse backgrounds, and she took a special interest in foreign cuisine and customs around meals.

In June of 2005, Pat travelled to Poland and stayed with family. On Father’s Day, Pat was able to visit the 1,000- year-old church where her father was Baptized.

Sadly, Pat’s son Harry Jr. died from a brain tumor at the age of twenty-five. In the same timeframe her son Felix was diagnosed with a mental illness that took the son she knew away from her. Then, after 40 years of marriage, her husband Harry passed away, leaving only her daughter Dawn and her grandchildren, Kyle and Cody. Pat has had a lot of loss in her life. Since arriving at La Posada she just doesn’t have the energy she used to. She has been a caregiver for so many all her life, starting with parents and siblings, then to care for her own children and husband. Pat has made time to write the story of her experience living with her son Felix’s health issues. She finds great comfort in faith-based support groups that address the challenges of having a child with mental health issues. Pat says that being at La Posada makes her feel less alone and she finally has a place to rest.