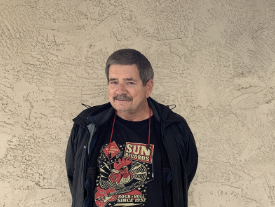 John was born in Watsonville to Dorothy and Russ. John’s father owned a service station, a car lot and a liquor store. He also served as County Board of Supervisors in Santa Cruz for 8 years. John’s mother was a homemaker and worked as a bookkeeper for the family business. She later opened a flower shop in Felton. John grew up in the 50’s in Santa Cruz. In fact, he lived right here on Frederick Street! He describes it as being similar to Leave it to Beaver, but with a beach. He attended local Santa Cruz schools before graduating from Santa Cruz High School in 1964, as the Senior Class Commissioner.

After graduation, John worked at the cement plant on Highway 1. He played pool and went to Cabrillo. From there he began attending Cal Poly, but liked playing pool so he left. Before leaving Southern California, he got very close to the family he worked for…coo coo ca choo Mrs. Robinson. He learned that momentary pleasures can outweigh values sometimes.

John has been married and divorced three times. His first marriage was when he was 21 and it lasted for a couple of years. At 24, he married his second wife at the Little Red Church in downtown Santa Cruz. At 30, he married his third and last wife and had his first and only child, his daughter Amelia. John also helped to raise his nephew.

Over the years John has had many careers and businesses. His most recent employment prior to semi-retirement was Manager of Transportation and Donor Services for Goodwill Central Coast. Prior to that, he had a hauling and demolition business in Fresno, a telemarketing company in Phoenix and a local pipeline corrosion company. He has also worked locally for PG&E as a corrosion technician, a land salesman in Florida, a collector for a loan company in Eugene and many other jobs in between. He has lived many lives and has had many experiences that are not quite ready for prime-time viewing.

In 2007 John made a big life and spiritual change, getting clean and sober. Since making this decision, his life has changed drastically. John is very involved in 12-step programs and has many occasions to give back through service work. These days he keeps busy working for IHSS. As an adult, John and his daughter Amelia were able to get close. She now works for Cal Fire as an aircraft dispatcher. Amelia and her husband are in their 40’s and have made John the proud grandfather of four cats. Recently, John adopted a 17-pound Maine Coon cat named Bella who very much enjoys eating and sleeping. She is the love of John’s life even though she bites and scratches him. John says their relationship is reminiscent to a couple of his marriages!