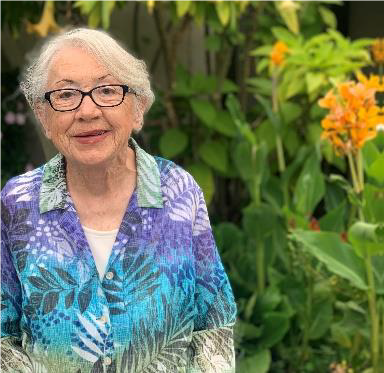 Evelyn, who goes by Eve, was born in Monmouth, which is near central Illinois, close to Mississippi. One of eight children, she had six sisters and one brother. Eve and all of her siblings were born at home. Her brother was the oldest and Eve was the third daughter. As children, Eve and her siblings didn’t have many toys, so they invented games and played outside until dark.

Growing up during the Great Depression, she was fortunate to have hard working parents who always kept a garden so they had plenty to eat and were even able to feed some of their neighbors. Her mother was a gourmet cook, often making pies with their wood burning stove. Eve’s mother often took a piece to an elderly neighbor, delivering it herself with one of the children. The U.S. was not as kind to its people during that time, something that left an imprint on Eve’s memory of being kind to others.

Eve’s father was a building contractor who remodeled and sold houses. Eve grew up with both sets of grandparents living across the street, one set from England and one set form Denmark. As they grew up, most of Eve’s siblings stayed in Illinois. Today, only three of her seven siblings are still with us. In fact, one sister who is now 80 years old still works as an Illinois RN!

At the age of 17 Eve started a family and was unable to finish high school. However, this did not keep her from pursuing an education, something she was grateful to receive. As soon as she was 21, she took for California with her first daughter to start life as a single mother. In California, she met and married her second husband. Soon after, she had a son and daughter. After losing her husband to cancer, she was once again a single mother. During this time, Eve was also the sold breadwinner, supporting her family of three.

Throughout her working life, Eve has had a number of different careers. She first started at the YMCA, working in their fundraising office. In 1979 Eve earned her Bachelor’s Degree in Human Relations and Organizational Behavior (HROB) from the University of San Francisco. Eve worked hard for her education, as she was not only a part time student but was working full time as well. This drive came from her love of learning.

As a young person, Eve had learned shorthand, which was particularly useful while being employed. Eve worked as the City Clerk, an elected position in Lake Tahoe, for 15 years. When she moved to San Jose, she worked for IBM as a Legal Assistant (Paralegal) on its Cybernex lawsuit.

Today, Eve is still close with her two daughters. One daughter, Shawna, lives in Santa Cruz. Eve’s other daughter, Connie, lives in Albany, Georgia. Sadly, Eve lost her son Ray in 2012 at age 53. Eve lives at La Posada with her dog Molly, and says “life is fragile, we are lucky to be here”.

What do you enjoy most about living at La Posada?

“There are so many friendly people here and I felt at home right away.”